Our move is almost complete. Nothing like packing your own s*#$@ to realize you have too much.

Our old place was great but now Tom has a spot to have a falcon. I sense white mute in my future. Although he has compromised and set his sights on a Gyr Falcon which poops straight down instead of across the room.

We have a nice patch of tundra in the back and we have a yard. They brought in enough fill when this place was built to raise the yard above the tundra and grass grows well. Now if  we can only keep Nolan from eating it.

We should have internet by next week. Maybe the boxes will be unpacked too. At least the truck will be in the garage and I won’t have to scrape ice much more. The view down Blackberry  Street This is a picture taken by a fellow Flickr member and part of our tech team at the district office. Ian has a great collection of photo’s on his site. I am sure this won’t be the first time that I add one of his creations to my posts about life in Bethel.

This shot is a classic fall view on the Gweek River. We love to duck hunt and pick berries here. Its a tributary a few miles north of Bethel on the Kuskokwim. Obviously someone passed on here. Probably of hypothermia. Or maybe a boat accident. It happens too often.

Nolan, Tom and I spent 24 hours in Anchorage this weekend. All of us had what I will now call a “Big Mac Attack”.  Its that feeling of needing to get out of Bethel and purchase things you just can’t get in the tundra. I’d like to say that it was as simple as someone like me, who would normaly choose organic, submitting to a fast food fix.

It all started on Wednesday night when Nolan threw up a wad of tundra grass and raw hide. Tundra grass has been known to completely bind a dogs intestinal track requiring emergency surgery. He woke me up several times in the night to go outside.

The next day he had diahrea and would not eat. At lunch I could not get him to go back in the kennel. We have never argued over this, he loves spending the afternoon outside. I had to get a leash and drag him in.  That evening he panted and paced and still had an upset stomach. His ear began to swell up and he had a rash all over his belly and legs. He wouldn’t eat and was biting himself.  He was up all night pacing, panting and pooping.

When things weren’t better on Friday and his ear continued to swell, I called the vet. I knew we had to get him some medicine. Then I found out that the vet who comes to Bethel wasn’t even in his Anchorge office until Sept 14. The vet tech who can help with meds in Bethel was out of town too. I was referred to the Emergency Vet Clinic in Anchorage.

So begins our 24 hour trip to Anchorage. I could have flown Nolan in by himself for $200 dollars, but if I went in, I could bring Pete’s body as cargo and save the courier costs. I could also buy supplies and yes, eat fast food. I booked a flight on the 8pm jet. It’s a holiday so I cash in a companion ticket for Tom and book a room and a car.

We got into Anchorage and at 10:00pm and arrive at the Vet clinic by 10:30pm.  I had called to tell them we were coming in, but they had an Emergency and said it would be 3 hours before we could be seen. We were tired and had not eaten due to nerves and stress over the whole drama of the situation.I think they finally realized we had just flown 400 miles to see a vet and squeezed us in within a half hour. They took Xrays and we were relieved that there was no obvious obstruction in Nolan’s stomach but there was matter and a lot of gas. His ear was about an inch and a half thicker than normal, red and hot. He got ear antibiotics, a shot for nausea and gas and some sedatives to help him sleep and recover. Then they told us to return if he didn’t get better (As if  it was so easy).

We were still a bit anxious about Nolan improving. They told us to put him on a bland diet. So when we drove up to the MacDonalds for our 1:00AM dinner, we ordered him a grilled chicken sandwich with no sauce. I had the number 6 and Tom had the number 15.  The stomach shot worked and Nolan had his first meal in two days. I guiltlessly enjoyed my Big Mac and fries too.

Saturday morning, I woke after sleeping without interruption for the first time in two days. The sedatives worked and Nolan’s ear was much better. His stomach was making a lot of noise though. I left the boys to sleep in and did 150 lbs of shopping at Fred Meyer’s.

The boys woke up and we drove to Kincaid Park for a walk. We were hoping Nolan would poop and continue to show signs of no blockage. He was eating but very finicky. Which is not like Nolan. It was a gorgeous sunny day. A great day for a walk in the park. We did a bit more shopping and then tried to decide if it was safe for us to go back to Bethel. After another walk we decided to risk a return so we could enjoy our Labor Day on the tundra.  (Of course Tom wanted out of the city)

Today I am happy to report that Nolan is back to  normal and I am eating salmon and brown rice again! Tom just earned his tail wheel endorsement and completed his mandatory emergency maneuvers training for flying USFWS assignments. He spent the week in Cascade Idaho flying this Super Decathlon Aerobatic airplane. He is proud to announce that he didn’t toss  his cookies on any of the spins, stalls, or rolls he was put through.  The picture above is from his last day. Notice the right sleeve. He had to push it up so that it wouldn’t snag on his shoulder harness as he attempted to control the plane.

Besides completing some of the best aviation training, he enjoyed the scenery of Idaho as well as the hotsprings. But best of all Tom visited the archive for American Falconry at the World’s Bird of Prey center in Boise Idaho.

I am glad to have him safely home and on the ground. 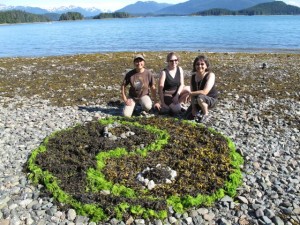 I had the priviledge of attending the Basic Arts Institute in Juneau this summer. This event is supported by the Alaska Arts Education Consortium.This was a fantastic opportunity to improve my teaching skills.

Last year, I attended the 3 day institute in Bethel and gained tons of ideas for integrating the arts into science. My students painted cells and organelles in Biology last year and they learned how to use texture to add detail to their science diagrams. This year I will continue to add music, visual arts, and storytelling skills that I learned in Juneau.

The picture above is the result of our study of Andrew Goldsworthy’s work. This is one of the Art Kits that our school has (available online at Project Articulate). After studying his work. We spent the afternoon at a beach on Auk Bay outside of Juneau. We had fantastic weather. A perfect day for gathering seaweed and tapping into our creativity.

One of my jobs at the institute was to document our work digitally. Pictures, music and video can be found at the Arts Institute Ning.  You can see more beach art and pictures from our 2 week adventure at this site.